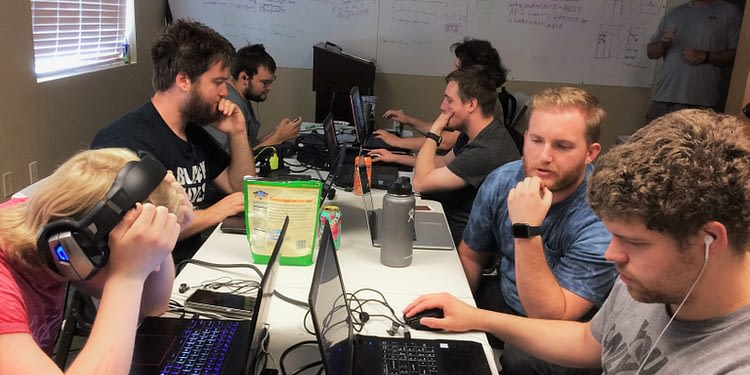 We finished code school a few weeks ago, and it was a great experience for me.

The knowledge I gained from my experience there was very beneficial to me.

Me and my partner, Richard Timpson, worked on a web based winery application that lists all of the wineries in North America.

I worked on things like searching, filtering, and layout, while he worked on backed routing and controllers to pull the data we had.

All in all, code school was a great success for me,

I learned loads of valuable information and because of completing code school,

I may be able to test out of some web design classes at Dixie this upcoming semester.

I worked on a team to develop a web application that dynamically calculates safety stock based on demand history, lead time history, and desired service level.

I translated the math into JavaScript, created the server/database, created an API, and styled most of the user interface. 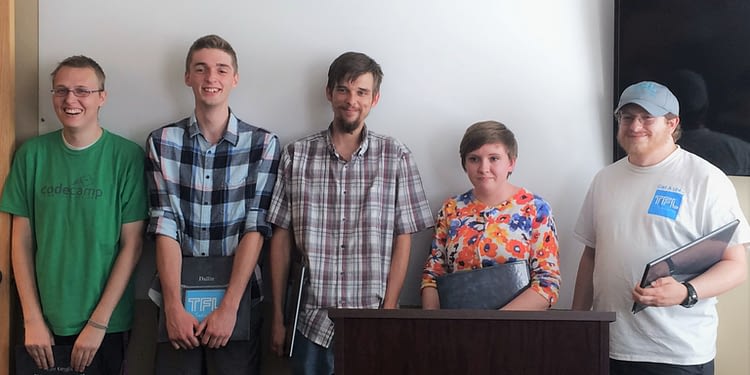 We had an amazing certificate and advancement ceremony for five graduating students.

Amber, Dylan, Dallin, Eric and Lee all have moved on to great things!

We are so proud of their progress, work and successes.

Each have created a successful path forward and are rocking it!

We will miss them and hope they will come back to visit often.

We never know when a student starts where they will land; finding themselves and working through roadblocks leads often to new paths and possibilities.

We have tried to ensure that each student finds their landing place as a destination school more than a transition school.

Congrats to our students and supporters who have all worked so hard!

InfoWest is a pretty sweet company, the atmosphere there was friendly and relaxed.

We got to see their help desk room as well as their server room.

Anyone with a background in Information Technology would agree that they feel at home when entering their help desk room.

MetaShield is a company that creates advanced coatings for materials like glass.

We got to see their chemistry room where “all the magic happens.”

We also got to see their highly advanced, scientific, machinery that’s used to measure various different properties of whatever coating they’re testing.

We had a great time out at the Red Cliffs hike recently.

There was a lot of runoff, which created some beautiful clear pools of cold water that only
Grady dared swim in.

Amber, Dylan and I hiked in further while the rest hung out at the first pool.

We had to pass a rocky obstacle using some rope to avoid falling into the pool of water below.

It was kinda tricky, and a lot of fun.

How can understanding confirmation bias be useful?

Confirmation bias is the tendency to interpret new evidence as supportive of one’s existing beliefs or opinions.

Most of us do not go around trying to prove ourselves wrong.

It feels terrible to be proven wrong.

If feels great to be right.

We get to feel… smart, confirmed and in control.

The only thing that changes confirmation bias is something so glaring that we are willing to believe it and feel terrible about it, long enough to change our beliefs or opinions.

Most of the time our brains would rather be efficient and keep believing the same beliefs.

Even if those beliefs themselves feel terrible.

Confirmation bias is great when prior conclusions are terrific.

If we believe we’re awesome our brains find evidence for why we’re so awesome.

Confirmation bias is not great when prior conclusions are terrible.

The process of changing our belief systems to support us in being more successful takes effort.

Then confirmation bias works in our favor to confirm our new helpful beliefs.

In a place called Snow Canyon, near St George, there is a really cool hike that takes you to some lava
tubes.

This is the hike we went on at some point in March.

The tubes are set into the ground(of course) and go pretty deep into the earth.

If you want to explore them, you do need a flashlight and a good sense of where you are because,

according to some people, they go in all sorts of directions.

I don’t really  if that is true, but it keeps me from hiking too deep into the caves formed by the tubes.

At TechieForLife, neurodiverse young adults like those with Autism Spectrum Disorder (ASD) get connected for success.

Find a place to belong and support to succeed, at TFL.
Debbie Grygla

Debbie Grygla is the Marketing and Admissions Director who works with educational consultants, parents and students to find out if TechieForLife is the right fit.

Debbie knows as a parent herself how important it is to find the right support for a child that is struggling.

Debbie has parented neurodiverse foster/adopted children of her own into independent adulthood. Her son, Lee, was TechieForLife’s first student.

Debbie is also a trained Life Coach and teaches a weekly life skills class at TFL.

Debbie is a dance mom, kid taxi driver and an avid personal development podcast listener from California, Arizona and for the last six years Toquerville, Utah.