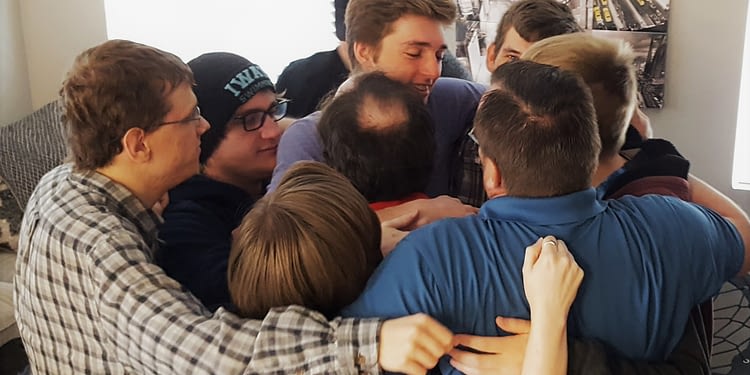 One of the most rewarding parts of working in this environment is being able to build real, meaningful relationships with our students.

We are all “equals but with different responsibilities” (and age as they remind me often).

We get to interact like a real family to practice relationship skills.

That means butting heads a little, getting our feelings hurt and having real conflicts.

But those things are balanced by the growth, connection and enjoyment that comes from attachment in our relationships.

Success and appreciation from resolving conflicts and seeing the hard times through to the good times makes it all worth it.

I want to share some of my favorite times lately:

These show some of their best sides, their redeeming qualities.

We get to experience these along with the hard stuff.

We know that parents and grandparents are missing out on it, but only temporarily.

To our student’s families and sponsors I would say that these young adults are at TFL to become who they are meant to be so that they can come back to you better.

But while they are here they will be cherished as long as we have the privilege to do so.

They encouraged me to come along and try it, and

even though I was hesitant,

I decided to take them up on the offer a few weeks ago.

It was a little scary at first, but it was pretty fun.

It’s a great way to exercise, and it gave me a significant feeling of accomplishment when I got to the top of the climb.

We were named the, “The Wild Bunch” when we entered the escape room!

We had one hour to find Butch Cassidy’s gun

and we worked hard as a team solving puzzles,

using our nose to smell things and identify different scents,

we struggled with trying to figuring out anagrams

but we had a lot of fun working together.

but how each one contributed in helping us move closer and and closer to finding the gun.

The best activity EVER in TFL:

I’m used to go to places and have devices that have variety ways; like making a nicknames, displaying who shot you, life points, etc.

In Lazer Mania, we wear a vest that comes with a name like Buzz, Ninja, Shadow, etc.; and a blaster that you have to hold with two hands.

It has a hidden button I didn’t know.

We’ve played variety game modes like Color Variation where the color of our vest are chosen by random, and we shoot the different ones until everyone’s the same; Capture the Flag —my favorite— where 2+ teams attempts to steal the opposing team’s flag; and Shadow where each player’s vest are darken, and are given missiles—which that’s what hidden button is used for.

some didn’t and became sitting ducks.

Some can be—like Cam—a camper.

Sure it’s a “legitimate” strategy, but you can’t get more points that way.

I go for the strategy I follow when I played Doom: If you stand, you die.

I wish I have a set of black clothes so I could be hidden; like one vlog of a person who talked about a group who go to laser tag places called “Hunters.”

Of course, I won’t cheat like them, which is using strutter lights and electrical tapes to cover the sensors.

Also, I wish some laser tag games to have a grenade-like device,

so I can take down the “CAMper.”

Back in December, TechieForLife held a certificate ceremony to wrap up the end of the semester.

Students received certificates once they had shown a foundation of literacy, skill, knowledge, and application in coding and design skill sets.

Our students have worked hard over the past semester and it was a great opportunity to recognize their hard work and success as they press forward in Coding and Design.

At TechieForLife, neurodiverse young adults like those with Autism Spectrum Disorder (ASD) get connected for success.

Find a place to belong and support to succeed, at TFL.
Debbie Grygla

Debbie Grygla is the Marketing and Admissions Director who works with educational consultants, parents and students to find out if TechieForLife is the right fit.

Debbie knows as a parent herself how important it is to find the right support for a child that is struggling.

Debbie has parented neurodiverse foster/adopted children of her own into independent adulthood. Her son, Lee, was TechieForLife’s first student.

Debbie is also a trained Life Coach and teaches a weekly life skills class at TFL.

Debbie is a dance mom, kid taxi driver and an avid personal development podcast listener from California, Arizona and for the last six years Toquerville, Utah.